News of the Nemean Games

They say about us

In this section are gathered photographs from the different revivals of the Nemean Games. If you have photographs of past Games, please send them to us with your name, the date of the photograph, and a caption as precise as possible. We will try to post all your submissions, but we reserve the right to refuse material in the case of redundancy, poor quality, or bad taste.

If you see yourself in a photograph on this site, but without your name in the caption, please let us know so that we can add it.

We start with the dedication of the stadium in 1994 when the idea of the revival began. 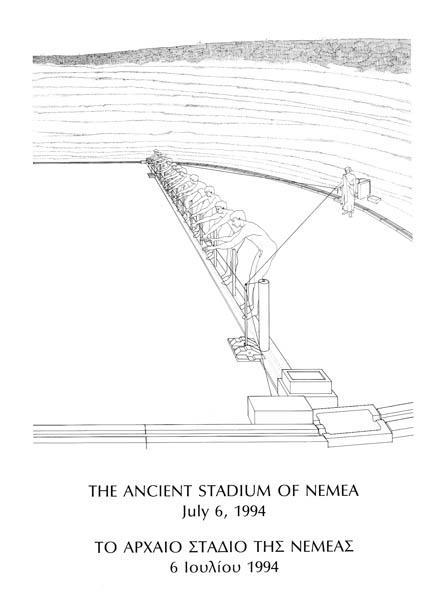 1 Exterior of the Program for the Dedication of the Stadium 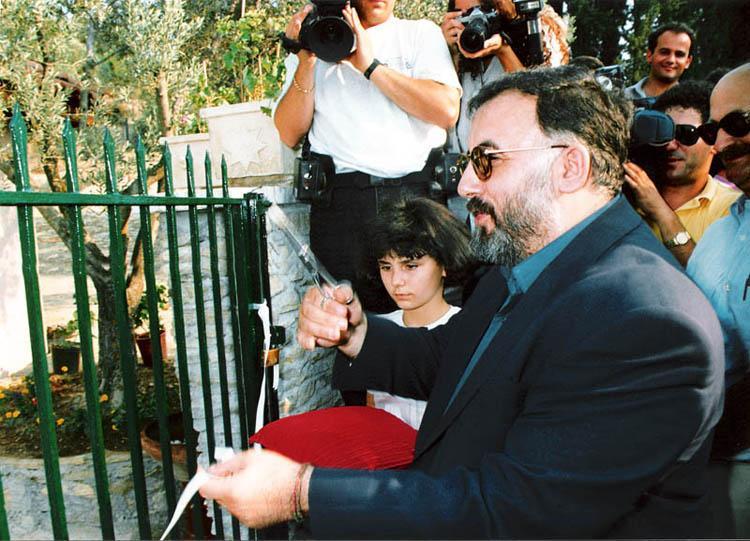 2 Minister of Culture Thanos Mikroutsikos cuts the ribbon to open the Stadium of Ancient Nemea to the public. 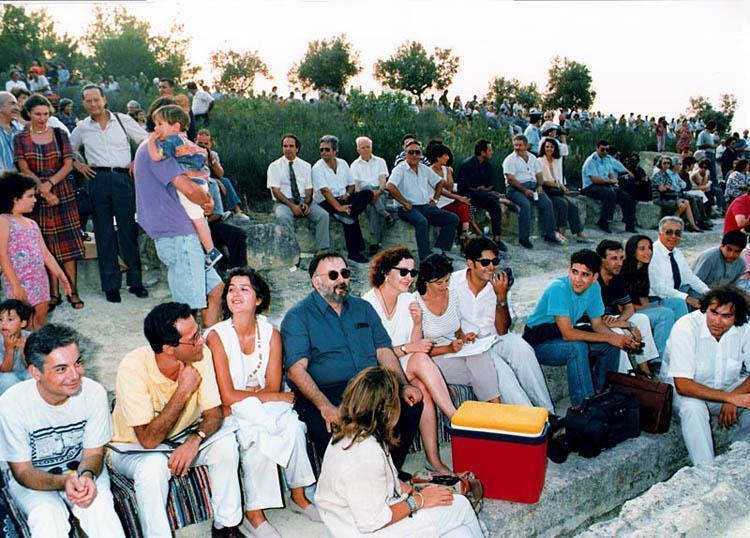 3 The front row seats (“proedria”) in the ancient Stadium of Nemea with Culture Minister Mikroutsikos at center left and, at the right with a tie, the Governor of the Korinthia, Ioannes Stavraka. At the upper left corner are Mr. and Mrs. Theodore Papalexopoulos, and George Panagiotou who would become a member of the first Board of Directors of the Society for the Revival of the Nemean Games. 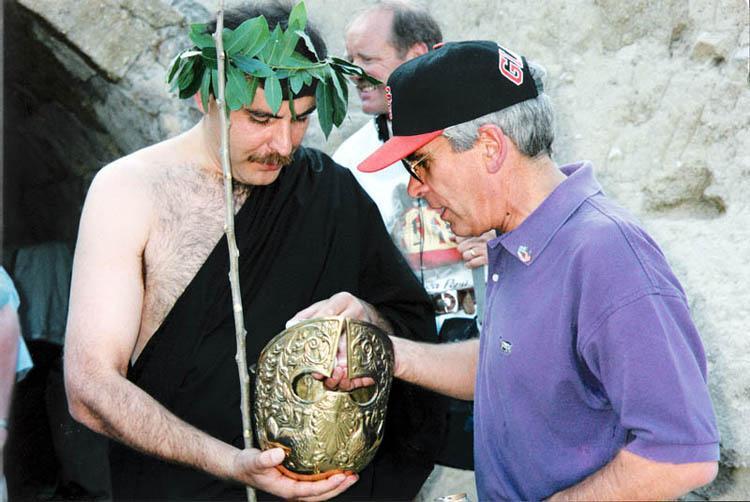 4 U.S. Ambassador to Greece, Thomas Niles, examines the marble lots in the brass helmet held by Kostas Demetriou. Niles wears a San Francisco Giants baseball cap and, on his collar, a pin symbolizing the co-operative effort of Greece and the United States at Nemea. 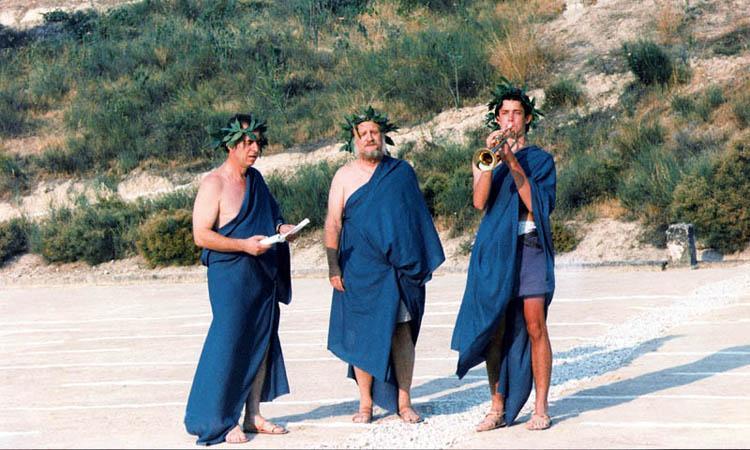 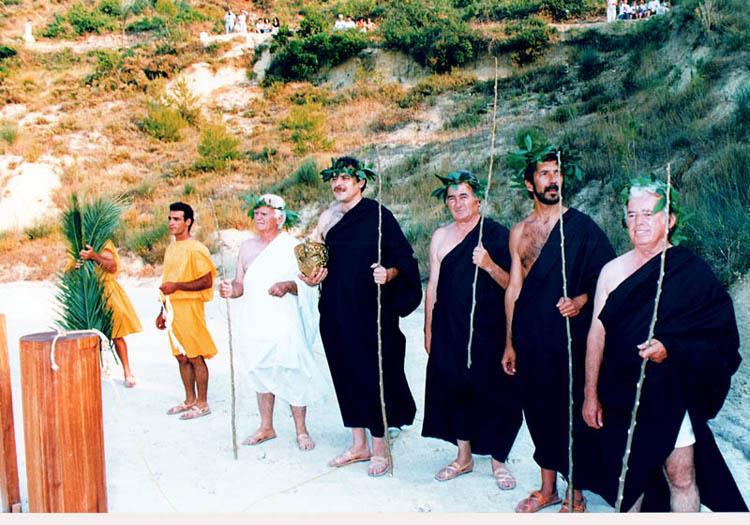 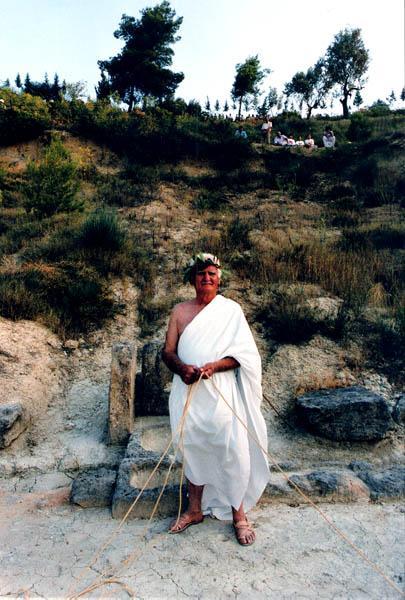 7 The Starter (Aphetes), Theodosios Zavitsas, the workman who discovered the starting line of the Stadium 20 years earlier (1974) and the entrance tunnel to the Stadium four years after that (1978). 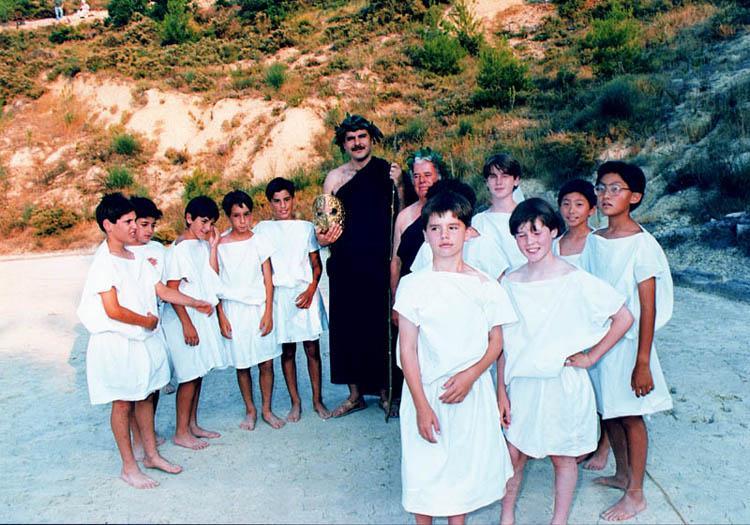 8 Before the first race, the judges (Hellanodikes) Kostas Demetriou and Kostas Peppas surrounded by young athletes from (on the left) the local grade school of Ancient Nemea and (on the right) members of the San Francisco Boys Choir. 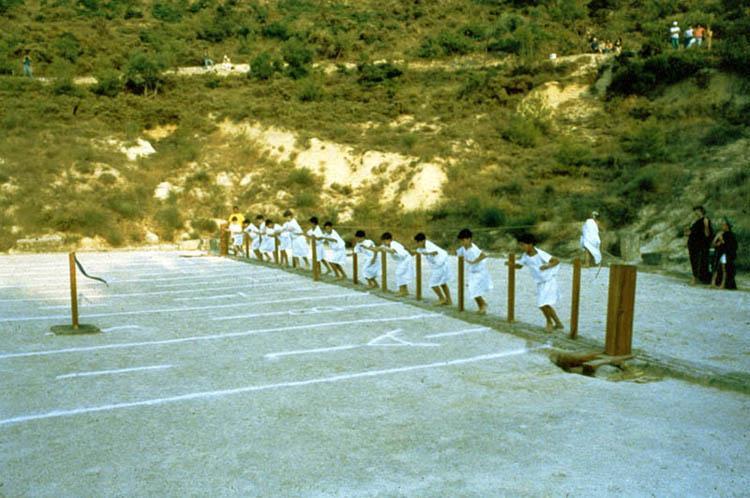 9 The start of the first race. The arm of the starting mechanism (hysplex) is a blur as it throws the barrier cords to the ground. 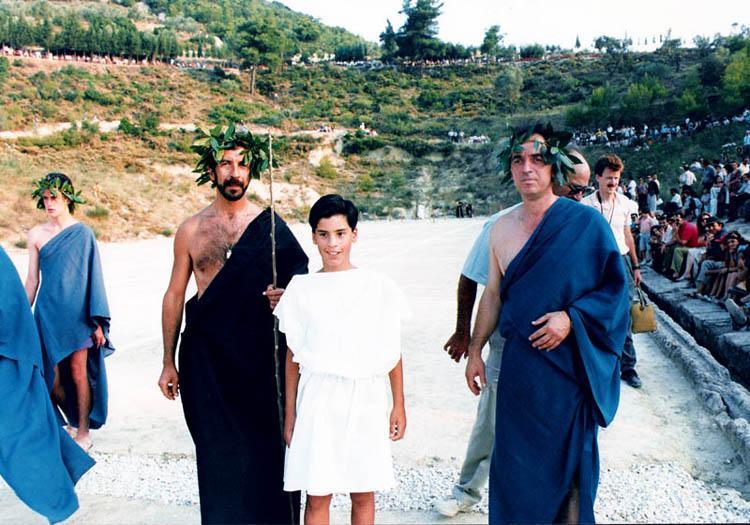 10 The first victor in the Stadium of Ancient Nemea after 2,265 years, Nikos Benekos, is led on his victory lap by the judge, Aristoteles Kalles, and the herald, Demetrios Skotades. 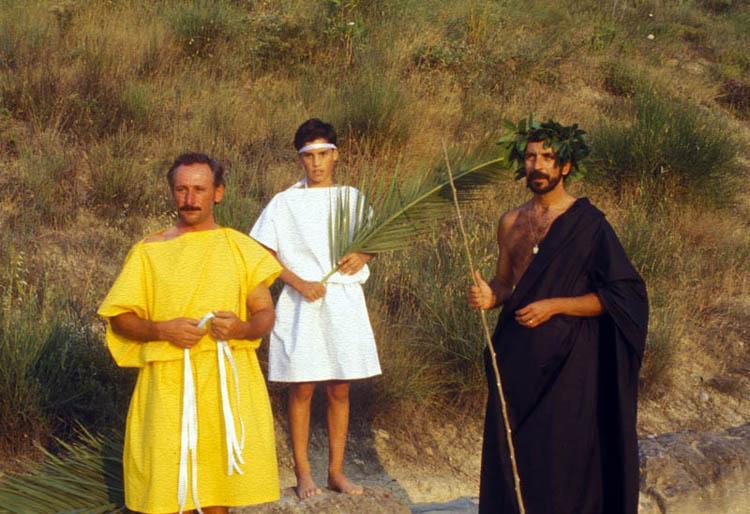 11 Nikos Benekos, with his preliminary tokens of victory: a ribbon around his head and a palm branch, awarded by the judge, Aristoteles Kalles, assisted by the slave, Kostas Ch. Peppas. 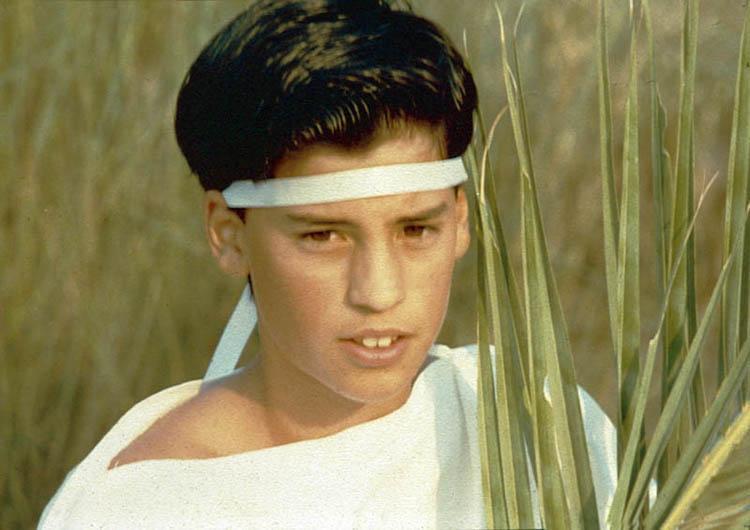 12 Victor Benekos with ribbon and palm. 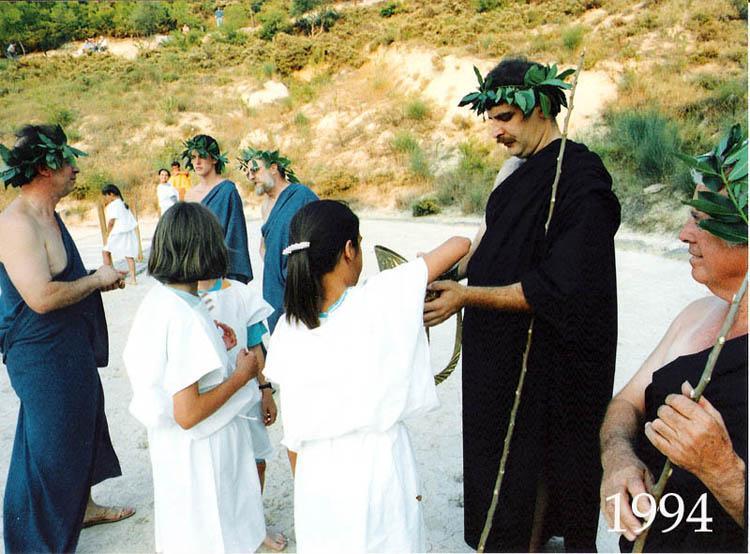 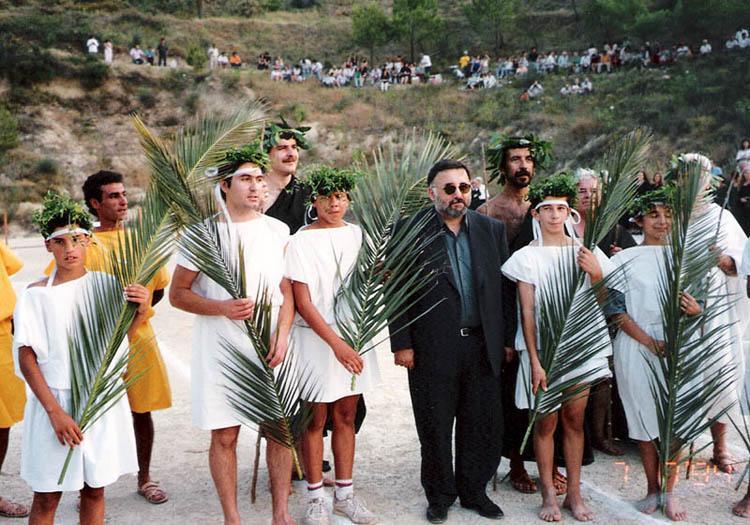 14 The victors have received their crowns of wild celery from Minister Mikroutsikos. 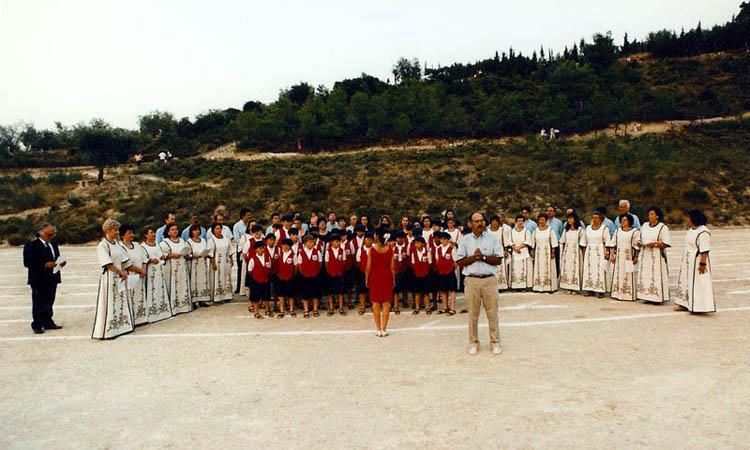 15 As the sun sinks in the west, the San Francisco Boys Chorus, led by Laura Kakis (red dress) combine forces with the Corinth Choir, led by Alexander Papayiannopoulos (at left) to sing the National anthems of Greece and the United States. Meanwhile, Stephen G. Miller addresses the audience, and the celebration ends. 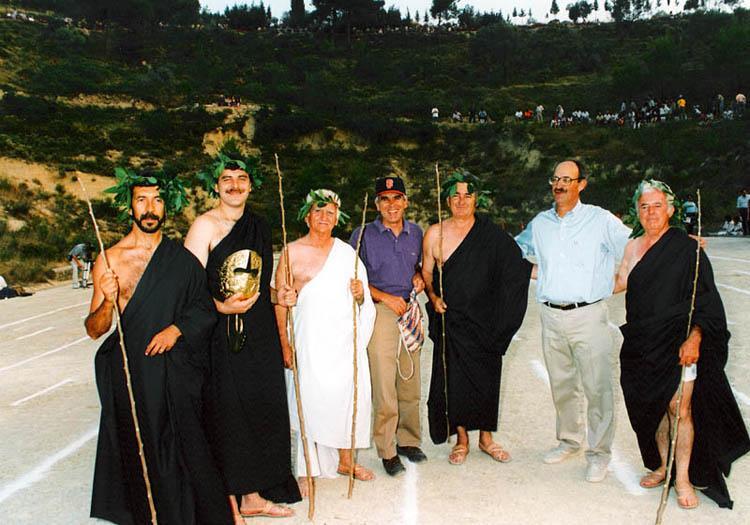 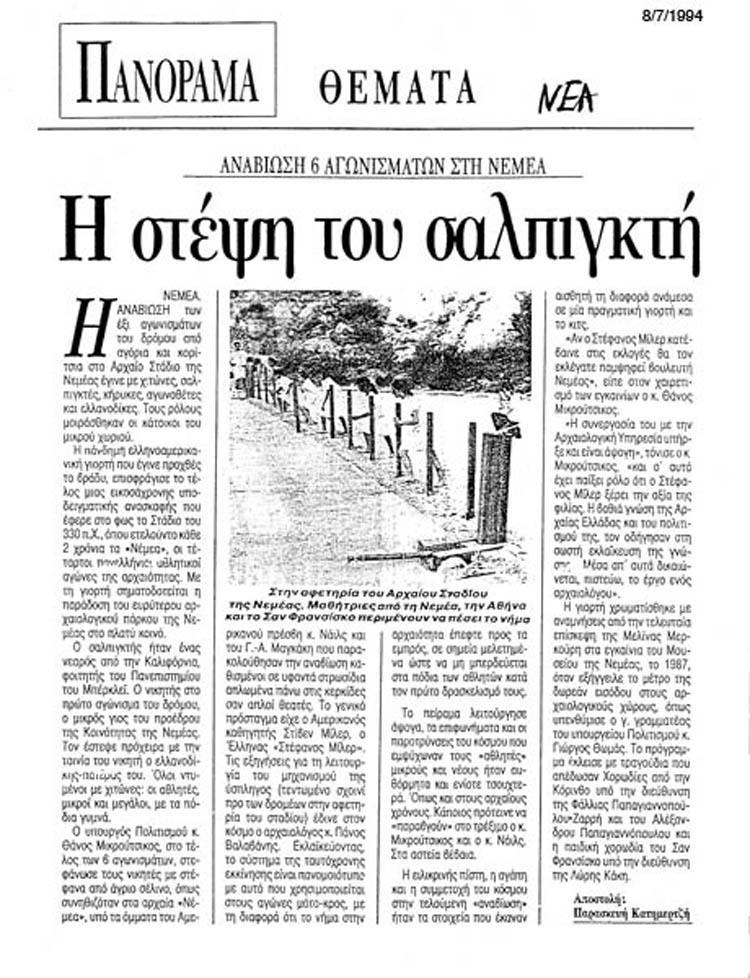 17 Clipping from the Athenian newspaper “TA NEA” of July 8, 1994 with an article entitled “The Crowning of the Trumpeter” by Paraskeve Katimertzi. The article has factual errors:

Nonetheless, the article does capture the spirit of what happened at Nemea on July 6, 1994.

The caption of the photograph: “At the starting line of the Ancient Stadium of Nemea, girl students from Nemea, Athens, and San Francisco await the fall of the cord.”

The revival of six footraces for boys and girls in the Ancient Stadium of Nemea took place with chitons, trumpeter, heralds, game-producers, and Hellanodikes. The inhabitants of the small village shared these roles.

The community-wide Greek-American celebration that took place the evening before yesterday put a seal on the end of a twenty-year long exemplary excavation that brought to light the Stadium of 330 B.C. where the Nemean Games – the fourth of the Panhellenic Games of antiquity – took place every two years. The celebration marked the opening of the archaeological park to the broader public.

The trumpeter was a youth from California, student at the University of Berkeley. The victor in the first race was the young son of the President of the Community of Nemea. He was crowned with the temporary ribbon of victory by his Hellanodikes-father. All were clothed in chitons, and the athletes – young and old – were barefoot.

The Minister of Culture, Thanos Mikroutsikos, at the end of the six competitions, crowned the victors with wreaths of wild celery as was the custom in the ancient Nemean Games, under the watchful eyes of the American Ambassador Niles and of G.A. Mangakes who watched the revival seated on blankets laid out on the seats like simple spectators. The American professor Stephen Miller, the Greek “Stephanos”, supervised. Explanations for the working of the hysplex machine (a cord stretched in front of the runners at the starting line of the stadium) were provided to the audience by the archaeologist Panos Valavanis. In common terms, the system of equal starts is very similar to the that which is used in the motor-cross competitions with the difference that the cord in antiquity fell forward at a pre-determined point where the feet of the athletes would not be impeded at their start.

The experiment worked perfectly, and the cheers and exhortations of the crowd encouraged the young “athletes” spontaneously and sometimes even strikingly. Just as in ancient times. Someone suggested that Mikroutsikos and Niles should compete in a race – as a joke to be sure.

Sincere faith, love, and the participation of the people in the “revival” were the elements that made a perceptible difference between a real celebration and a performance of kitsch.

“If Stephen Miller entered politics he would be elected unanimously a member of parliament from Nemea,” said Thanos Mikroutsikos in his speech at the dedication.

“His co-operative work with the Archaeological Service was and is flawless,” emphasized Mikroutsikos, “and in this a role has been played by the fact that Stephen Miller knows the value of friendship. His deep knowledge of ancient Greece and its culture has led him to a proper popularization of his knowledge. This is how, I believe, the work of an archaeologist is justified.”

The celebration was colored by memories of the last visit by Melina Merkouri for the inauguration of the Museum of Nemea in 1987 when she announced the establishment of free entrance to archaeological sites as the General-Secretary of the Ministry of Culture, George Thomas, reminded us. The program ended with songs by the Choruses of Corinth under the direction of Fallia Papayiannopoulou-Zarre and Alexandros Papayiannopoulos, and the San Francisco Boys Chorus under the direction of Laura Kakis.